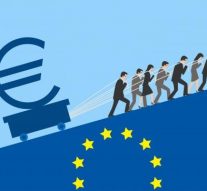 It’s been more than 60 years since the Roma Treaties were signed, paving the path towards the modern European Union as we know it today. Facing with vast severe internal and external crises, this entity managed to remain functional and solid. Over the past six decades of its existence, the European countries mainstream was tackling “future” as a uniting category. Besides current politico–economic and security cooperation, it seems that what kept European dream was the promising prosperous future, rather than ongoing integration processes.

Global occurrences and age of anxiety have led to emerging complexity of European continent. Therefore, there will be numerous actors dealing with the European economy in 2050. Global institutions such as the International Monetary Fund and the World Bank would highly likely have the most impact towards the trends of financial affairs in Europe (primarily in Eurozone). The second group of actors are national Member States. The 27–bloc will remain in power of unanimous decision-making process, but they won’t be further escalated to open confrontation. EU MS will remain key actors in establishing the EU economic priorities and financial policies. Supranational character of decision making will surely alleviate national sovereignty in economic and fiscal affairs. Citizens and even big cities (both conglomerations and financial centers) will obtain a significant role as they would be more interested in creating their economic powers to push the Union’s development.

Europe in 2050 will stagnate with its growth, both within Eurozone and its national member states. At first glance, prospects for the global economy look rather positive: projections show that average global economic growth will be around 3% a year in the coming decade, making the world a richer place than today. Most of this growth will happen in the developing economies, whose growth will accelerate from 3.1% currently to 3.6%. Developed economies, too, will grow, albeit at a much slower rate: Europe, for instance, is projected to grow at 1.4% a year – probably not enough to significantly improve employment rates, investment levels and the integration of young people into the labour market. As the European Institute for Security Studies predicts, there is a somewhat paradoxical dimension to it, at least in Europe: the feeling of inequality may well intensify in societies that are approaching a high level of economic well-being. This is because in highly unequal societies, every new generation in the bottom income share will see its status improve over time. In equal societies, however, this improvement is obviously no longer as visible. And in Europe a 50-year trend towards poverty reduction is paying off – we are already very equal, meaning a perception of stagnation is setting in.

The bunch of national economies or a single disciplined economic entity?

The European Semester as an instrument was enacted in 2011 with the consent of the Council and the European Parliament to foster economic policy coordination, to enforce the overhauled Stability and Growth Pact and the new macroeconomic imbalance rules, and to achieve Europe 2020 targets. In analysis of the European economic Semester, we should be more careful, as these kinds of instruments are very tough to explore and predict its future. Hence, the main question to be provided with an answer should be whether the Semester is introduced in order to foster or to monitor the European economy in general?

What also creates the situation more complex is the paradox in which the European Semester becomes the European “Trimester”, since there is one more time element within the instrument, which makes the third element of it. This is the Spring part of the Semester, which has not been introduced at the first version of the instrument in 2011.

These issues have not been important as it was to deter a key difference between the initial role of the Semester. It relates to the distinction between the original ideas on which it is based on. Some officials claim that it relates to the unifying of dozens European single national economies, while the academic community state oppositely, that it aims to discipline a single European economic entity, creating a tough-functioning system without the clear perspective.

It is highly likely that Europe in 2050 would become more consistent and stable entity with solid democratic and economic performance. As only integrated European economy could be competitive within the global trade, the EU Member States must agree upon further ways of economic, fiscal, and financial consolidation for the midterm period.