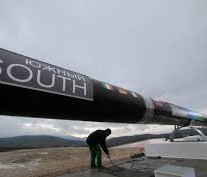 No Comments on South Stream: chronicle of a death foretold 75

The South Stream project, whose costs were estimated to be about 40 billion dollars, was expected to pass through Bulgaria, Hungary, Serbia and Slovenia, avoiding Ukraine. It was supposed to connect Russia to Southern Europe with a 3600 km-long pipeline (of which 2400 km across the Black Sea) and an annual 63 billion cubic meters gas capacity (15% of European annual consumption).

The project was meant as an alternative to the Ukrainian route.
Its construction started on December 2012 in the Russian Caucasia, expected to start to work by December 2015 and to be ready at full capacity in 2018. This gargantuan project has been planned by a consortium comprising Russian group Gazprom (50%), Italian ENI S.p.A. (25%), German Wintershall holding (15%) and French EDF (10%).

However, South Stream was beset by problems since the beginning. First of all, technical difficulties regarding the construction of the pipeline under the sea risked jeopardizing the project. Then, on April 2014 the European Parliament arose the issue of a breach of unbundling regulations since Gazprom was vertically integrating the market, being at the same time producer, distributor and seller.
Finally, given the Ukrainian crisis, it became clear that it would have been impossible for any Russia-UE pipeline to be concluded.
Then, in June 2014 the European Union asked involved Member States to withdraw the project; the first one who stall on the construction was Bulgaria: definitely, Russia could not have started building the underwater pipeline and stop at Bulgaria!

That’s why Mr Putin, during his visit to Turkey at the beginning of December, stated that the South Stream project is over and signed a new gas supply deal with Mr Erdogan :

South Stream is thus the first victim of European sanctions against Russia due to the Ukrainian crisis, but the Great Russian bear knows how to survive to cold winters.