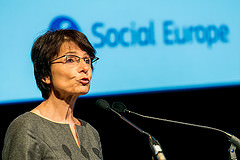 Job creation, decent work and modernization of social protection systems are the recipes of Commissioner Thyssen to tackle poverty and social exclusion.

During the Fourth Annual Convention of the European Platform against Poverty and Social Exclusion that took place in Brussels on 20-21 November, Thyssen explained the priorities of her mandate and how the Commission intends to proceed to meet the Europe 2020 target for lifting 20 million of people out of poverty and social exclusion.

Job creation is the top priority of the new EU executive and is going to be at the core of the 300 billion euro investment plan. In the intentions of the Commission, the provision of new public investments will attract private funding, thus boosting growth and new jobs.

While poverty is often associated with joblessness, a significant proportion of the poor are actually employed (so called “working poor”). For this reason, as a second priority, the Commission will help people to make the shift into decent and rewarding jobs to tackle poverty and social exclusion.

In order to further support Member States on these issues, the Commissioner announced a greater integration of the social dimension in the European Semester of economic governance through country specific recommendations, and called for a better and full use of the European Social Fund.