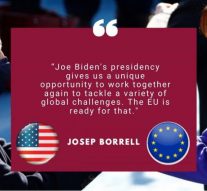 US President Joe Biden taking office represents an opportunity to reset transatlantic relations, despite Covid-19 pandemic still a major challenge to revive close ties in daily lives of people. The day of Biden’s inauguration, 20 January 2021, in any case represent an opportunity for Europe to strengthen EU-US ties and tackle common challenges and even threats to the democratic system.

Europe and America have traditionally always been allies, but under Donald Trump the US has been acting more unilaterally, withdrawing from treaties and even from international organisations. That is also a worrying trend that has reflected within American society, as emerged blatantly during the assault on the Congress in Washington just some day before Biden’s taking office.

Despite many changes in the last few years, the richness and diversity of American society owes much to successive waves of immigration from practically every European country during the past 500 years. This accounts for the extent to which Europeans and Americans share common values and maintain close cultural, economic, social and political ties.          For these reasons it is highly probable that at the end of Biden’s presidency Transatlantic relations could have a new relaunch.  An important forum of discussion between EU and US, particularly in this time of uncertainty due to Covid crisis, are the British and Italian Presidency of G7 and G20.  As regard the first forum – where comes together UK, US, Canada, Japan, Germany, France and Italy, plus the EU – the highest moment is scheduled in June in United Kingdom with the summit of the leaders.

Prime Minister Boris Johnson will gather leaders of G7 nations, the EU and guest countries at the G7 Summit in Carbis Bay, Cornwall on 11-13 June 2021. “We will use the UK’s G7 Presidency to unite leading democracies to help the world fight and then build back better from coronavirus and create a greener, more prosperous future”, London government said. But even more important in today’s world order will be the Italian Presidency of G20 (Saudi Arabia, Argentina, Australia, Brazil, Canada, China, South Korea, France, Germany, Japan, India, Indonesia, Italy, Mexico, United Kingdom, Russia, United States, South Africa, Turkey and the European Union), the international forum where comes together Countries that represent 80% of the global GDP, 75% of the global trade and 60% of the planet population.

The Italian G20 Presidency in 2021 focuses on three pillars: People, Planet and Prosperity. The leader summit is scheduled in Rome at the end of October. This summit will be a perfect venue to relaunch multilateralism and cooperation on a wide range of issue. As regard Labor and Employment issues, a ministerial Meetings is scheduled on 23th of June in Catania.  The priority areas identified by the Italian Presidency in this field are gender equality in the world of work, with the commitment of the G20 to encourage broader participation of women in the workforce and their effective inclusion in the economy; and the issue of social protection, paying particular attention to the need to adapt national systems to the challenges brought about by the changes taking place in the global economy and in our societies. In this sense it is of utmost importance promoting coordinated action to tackle the increased inequalities in the labour market following the ongoing pandemic.

Some categories of workers indeed have been disproportionately affected by the current pandemic, thus is crucial strengthening the current social protection systems not only to reduce those socioeconomic inequalities exacerbated by COVID-19, but also to ensure that the ongoing transitions in the world of work (such as the digital and green transitions), as well as the economic recovery from the pandemic, remain inclusive and sustainable. If EU and US will succeed in working together on these issues, a good basis for relaunching Transatlantic relations on social and employment issues can be achieved.