Home / Employment and Social Affairs / Can the Slovenian Presidency be a “broker” between Hungary and the EU? 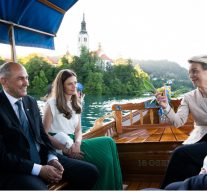 No Comments on Can the Slovenian Presidency be a “broker” between Hungary and the EU? 30

The second Slovenian Presidency of the EU Council kicked off on the first of July 2021, following the one exercised in 2008 soon after the full membership obtained in 2004.

Many things let imagine that it would be a very different presidency respect to the one exercised 13 years ago, and not just for Covid-19 crisis. “Today, the European Union is very different than it was at the time of Slovenia’s accession as well as the first Slovenian presidency of the Council of the EU”, Slovenian Prime Minister Janez Jansa said before the EU Parliament explaining the priority of his Country’s Presidency.

“We could say that the Slovenian presidency in the first half of 2008 was the last presidency not marked in one way or another by a severe crisis. After that, they have come one after another: financial crisis, migrant crisis, the occupation of Crimea, the creation of frozen conflicts in our eastern neighbourhood, Brexit, and the coronavirus pandemic since the beginning of last year”, he underlined adding: “We strongly hope the time has come in this semester when the actions of the European Union can and must become more strategic and long-term, oriented towards achieving the goal set by the fathers of the European Union. A Europe that is free, whole and at peace with itself and its neighbourhood”.

Slovenia’s six-month programme of the Presidency of the Council of the EU is based on four priorities. Under the slogan “Together. Resilient. Europe.”, Slovenia want to enhance the EU’s recovery and reinforce its resilience, reflect on the future of Europe, strengthen the rule of law and European values, and increase security and stability in the European neighbourhood.

But Slovenian government, guided by prime minister Jansa, is considered to be close to controversial Hungary’s head of government Viktor Orban. Jansa, like Eu Commission President Ursula von der Leyen, belongs to the centre-right European People’s Party (EPP), and Ljubljana government aims at acting as a mediator in the dispute between Brussels and Budapest.  But many in the EU see Jansa as a promoter of a harder line to conservatism. For examples Frans Timmermans, EU Commission’s vice-president in charge of the European Green Deal, refused to join a group photo between the Commissioners and the Slovenian government.

“I simply could not be on the same podium with prime minister Janša after his unacceptable attack on and defamation of two judges and two S&D MEPs,” Timmermans said in a statement. “He challenged their integrity because they were in the same picture. Judicial independence and respect for the role of elected MEP’s are cornerstones of the rule of law, without which the EU cannot function. We can never stop calling out those who attack it”, he added.

Slovenia is currently the only country that has yet to send its candidates to the European Public Prosecutor’s Office (EPPO). During her visit to Ljubljana, von der Leyen said Slovenia must cooperate with the EPPO and appoint its candidates without delay, warning that this is “crucial to protect EU taxpayer’s money”. “As we collectively prepare and finance our recovery, trust is our most valuable asset,” von der Leyen said. Slovenian government is also criticized from Brussels evens as regard media freedom, while one of the biggest sources of criticism remains its position toward “illiberal democracy” in the Visegrad area.

The EU is concerned by legal challenges in Hungary and Poland to the supremacy of European law as Brussels seeks to uphold democratic principles and the independence of the judiciary in its 27 member states. EU leaders confronted Hungarian Prime Minister Viktor Orban, at the end of June European Council, over Budapest’s new anti-lesbian, gay, bisexual and transgender.

Jansa reported there were no major differences between EU countries over these issues at the last European Council. But Jansa and the Polish prime minister were the only leaders to back Orban on Hungary’s anti-LGBT law, while French President Emmanuel Macron spoke of a fundamental “East-West divide” on human rights, media freedom and LGBT rights. Speaking to the press, Janša said that the Slovenian presidency will be an “honest broker” in human-rights disputes among member states.

On the one hand, thus, Jansa is making rule of law a priority of Slovenia’s presidency, but on the other one he seems to understand it by its own way. What it seems to be clear is that Slovenia wants the EU to respect Hungary’s choice, without raising too much the level of political confrontation with Budapest on values.

If the Slovenian Presidency will be a success in this crucial task for EU unity remains to be seen, while Ljubljana could for sure contribute on another key issue: to keep Brussels attention on enlargement process, hopefully arriving to some concrete result. Slovenia will host on 6 October an Eu-Balkans summit, where the European Council will meet with the heads of state and government of the six Western Balkans candidates.