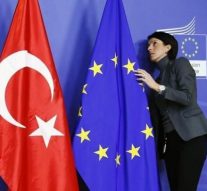 No Comments on Is the EU-Turkey economic link strong enough? 47

Turkey has been aspiring to join the EU for more than 45 years on. It was granted with the EU candidate country status in 1999, a point in time, after which no major changes and advances have been made. With the candidate status, Turkey and Croatia accessed jointly to the EU in early 2000s, which was an impeding motion for Turkey to speed up its accession path towards the EU membership. However, as Croatia insisted to detach its EU path from the Turkish one, these two accessions separated afterwards. And while the Croatian EU path has been a successful story, becoming a full EU Member State in July 2013, Turkey remains outside the bloc. Economic ties, however, kept their increase among the two sides. What are the key economic cooperation characteristics between the EU and Turkey? Who plays the vital role in this relation and what is the future of the trade among the partners?

In accordance with the EU trade portal, the foreign direct investments from the EU to Turkey in 2017 were 68 billion EUR, while Turkish companies investing in the EU in value of 19 billion. The website reports that Turkey is the EU’s 5th largest trading partner, both in exports and imports, while the EU is by far Turkey’s number one import and export partner, as well as source of foreign direct investment (FDI). After several years of rapid growth in the EU-Turkey bilateral trade in goods, in 2018 trade showed a mixed picture, due to the Turkish lira depreciation and broader economic difficulties in Turkey. EU goods exports to Turkey hence fell by 8.9% to €77.3bn, while imports from Turkey rose by 9.1% to €76.1bn. Overall trade in goods thus amounted to €153.4 billion in 2018. EU exports to Turkey are dominated by machinery and transport material, chemical products and manufactured goods. Turkey’s exports to the EU are mostly machinery and transport equipment, followed by manufactured goods. Turkey’s main export markets are the EU (50%), Iraq, USA, Israel and Russia. Imports into Turkey come from the following key markets: the EU (36%), Russia, China, India, and Iran.

The two sides are linked economically by the Trade Custom Union Agreement which was signed and entered into force in 1995. This agreements applies to goods that are produced in the EU or Turkey, including those wholly or partially obtained or produced from products coming from third countries which are in free circulation in the EU or in Turkey, as well as those coming from third countries and in free circulation in the EU or in Turkey. Turkey is also member of the Euro-Mediterranean partnership and as such is interested in concluding free trade agreements with all other Mediterranean partners, with a view to the creation of a Euro-Mediterranean free trade area, originally aimed for by 2010.

The biggest speed bump for Turkey is transport permits, something the UK could run into as well — transport permits for the 60,000 trucks Turkish operators that send into the EU each year. For each country through which a Turkish truck needs to pass, the driver must hold a permit from that country’s ministry of transport or an equivalent body. These permits are usually limited by quota, usually not enough, according to Turkish truckers. This Saturday, the shelf holding Austrian permits was bare — Turkey gets only 18,000 of them a year and releases them on a bimonthly basis. An official at the border said Austrian permits had run out 18 days into the new year. Turkey has invested hundreds of millions of dollars trying to speed up things on its end. It built a massive truck terminus an hour from the Bulgarian border, where customs agents carry out inspections and stamp forms that are then fed into a computerised system shared with the EU. The border gates themselves were revamped to create more lanes and parking lots with modern waiting areas. The goal, said a Turkish official, was to complete as much paperwork as possible before reaching the border. On the other end, Bulgarian border officers examine each truck, going over the paperwork and doing random drug and migrant checks.

While Turkey expands its relations with Russia and China rapidly, it leaves West values, but at the same time its challenges with West countries are expanded at the same rate. Turning Turkey to the East is not just political, it is also grown to the ruling and economic systems. Turkish government denied democratic results and suspend mayors or cancel the election (as done in Kurdish provinces and Istanbul), also trying to affect the Central bank and change the interest rate which appeared in TRY exchange rate. Therefore, the Turkish economy will be the first victim of the switch to East, not only because it was established due to Turkey – West relations, but also because it affects the eastern decision which could destroy it within just years and led Turkey to public uprising. Now it is up to AKP’s strategy regarding foreign relations and internal policies,  whether  to remain united without being splitted by some powerful leaders.