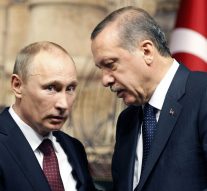 When Erdogan and Putin rekindled their relations, a chance to get free from dependence on Russian gas was gone for Europe, which is now silent before conflicting feelings of Russia and Turkey on energy.

When Turkey shot down a Russian warplane last year, relations between the two countries soured. Russia retaliated by cancelling plans to build a 900 km natural gas pipeline through Turkey, to be called TurkStream.

This new hostility opened an opportunity for Europeans seeking to escape from their own dependence on Russian energy. When it appeared TurkStream would fail, Europeans finally began preparing for alternative sources of natural gas. But geopolitical conditions change swiftly.

However, following the failed coup in Turkey last month, Erdogan and Putin have rekindled their friendship. The relationship has the potential to help Russia with its energy plans and military strategies in the Middle East and Ukraine.

Russian President Vladimir Putin, right, and Turkish President Recep Tayyip Erdogan shake hands at a news conference after their talks in the Konstantin palace outside Saint Petersburg, Russia, on Tuesday, 9 August 2016. President Erdogan travels to Russia to meet with President Putin for the first time since the apologies, in late June, for the downing of a Russian fighter jet along the Syrian border in November last year.

As a result of the meeting in Saint Petersburg, an intergovernmental agreement on the project was signed. The initial Russian infrastructure for the Turkish Stream is ready: one line of the Southern Corridor and a compressor station in the Krasnodar region have already been built.

Only the construction of a second line for deliveries to southern Europe remains in doubt. The connecting Poseidon pipeline from Greece to Italy has not progressed beyond the paper stage as Europe strives to diversify its supply of gas.

Gazprom delivered 27 billion cubic meters of gas to Turkey in 2015, making it the company’s second largest customer after Germany. The company first reached agreement on the Turkish Stream project with the Turkish firm Botas back in 2014.

The result of Russia and Turkey’s rapprochement is restoring European dependence on Russian natural gas for the foreseeable future. Before Turkey and Russia made amends, there were high hopes that Europe would commit to other sources of natural gas and not fall further under Russian dependence.

In the months following the fight between Russia and Turkey, much excitement, particularly about the possibility of Europe importing more American liquefied natural gas (LNG) emerged. Europe could also obtain natural gas from the Caspian Sea area, via a much shorter pipeline that would originate in Azerbaijan. Other sources of LNG include Qatar and the always friendly Australia. LNG imports would require the construction of new LNG import terminals and connecting pipelines.

Turkey’s ambigous attitude towards the project

Turkey itself is ambiguous about the project. Writing in Turkish newspaper Hurryet, a researcher for the Hazar Strategy Institute, Elnur Ismail, argued that the new pipeline would strengthen Turkey’s position as an important regional hub.

The country’s main gas consumers are located in northwest Turkey and the project would improve the reliability of supplies to that region. Yet ultimately, the Turkish Stream would increase Turkey’s dependence on Russian gas just as Ankara looks to end that reliance.

Indeed, the love and hate relation between Russia and Turkey is still ongoing and we, Europe, are silent onlooker, seeking a convenient and at the same time multiple source of gas.