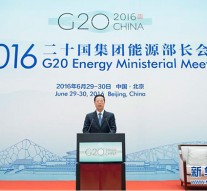 No Comments on G20 Energy Ministers meeting: What topics were on agenda? 82

Building up on the results of the Paris Climate Summit, G20 Energy Ministers reconvened in Beijing, China to discuss further strategies for creating a low emission energy future.

During a two-day meeting, ministers adopted a set of plans, scaling up renewable energy and guaranteeing energy efficiency, and extended their previous commitments. The director-general of the International Renewable Agency Adnan Z. Amin attributed the ongoing shift in the global energy sector to the concerted action undertaken by the G20: “Renewable energy costs have declined dramatically and will continue to do so, investment reached record levels, and global capacity additions set new record highs”.

What topics did the ministerial meeting touch upon?

Energy access debates echoed the agenda of Sustainable Development Goals, recognising affordable, reliable and sustainable energy as synonymous with capacity building and better quality of life. The parties highlighted the importance of market-based approach, portraying it as the only viable solution to the current challenges and perceiving economic growth as the desirable final product of their policies. Under the umbrella of energy access objective, experts adopted the Enhancing Energy Access in Asia and the Pacific: Key Challenges and G20 Voluntary Collaboration Action Plan. The document details steps for achieving universal energy access in the Asia-Pacific region.

The theme of cleaner energy dominated the discussion. The previous meeting of Energy Ministers In 2015 paved the way for the endorsement of an 11-point Communiqué and adopted the G20 Toolkit of Voluntary Options on Renewable Energy, boosting the potential for the deployment of sustainable energy. The toolkit, as it continues to be implemented, focuses on five areas: driving down technology costs, good practices exchange, finance mobilisation, technology potentials and deployment of modern bioenergy.

Ministers hailed the adoption of G20 Voluntary Action Plan on Renewable Energy encouraging the development of fossil-free affordable energy. Studies conducted by the International Renewable Agency shows that the investment in renewables in 2015 – $286 billion – was 3% higher compared to 2011.

However, to avert the menacing acceleration of global warming, this figure must double by 2020 and more than triple by 2030. Nonetheless, as opposed to global deterioration caused by fossil fuel investment, doubling the share of renewables can yield $4.2 trillion annually by 2030 – 15 times more than the costs.

Nuclear energy use was also put on the table, while parties addressed concerns about security and nonproliferation. Nuclear power did not enjoy the same amount of attention in the final draft of the Communiqué as did renewable energy. Nevertheless, certain environmental and political activists regard nuclear as the only viable low-carbon alternative at our disposal at the moment, with its global impacts being much smaller than those of coal.

Natural gas was regarded as a viable alternative during the transition stage of entering the low green house gas emission energy future, with many countries declaring their intention to expand its utilisation. This ambition, as benign as it might be presented, is a slippery slope. To stay under 2 degrees, the stated UN global warming cap, half of existing gas reserves must stay in the ground. Prospecting for new reserves and perceiving gas as a less harmful substitute divert our attention from Sustainable Development Goal 13 – to take urgent action in combating climate change.

G20 Energy Ministers also shone some light on energy efficiency and energy conservation. It culminated in the adoption of the G20 Energy Efficiency Leading Programme (EELP) that seeks to foster voluntary collaboration in optimal utilisation of energy resources. It will be applied to vehicles, networked devices, finance, buildings, industrial processes and electricity generation.

Finally, the issue of fossil fuel subsidies came under scrutiny, as ministers demonstrated their commitment to phasing out inefficient subsidies that encourage wasteful consumption. According to the International Energy Agency estimations, such subsidies amounted to $493 billion in 2014, over four times the value of subsidies to renewable energy.

Despite the reassuring spirit of progress and the celebratory nature of fresh commitments, a number of issues remain unaddressed. Plans and programmes are being adopted on a voluntary basis, and individual countries face the challenge of putting them through economic and political hurdles of their systems. The latter might result in success or in abject failure, and mere encouragement is not a recipe for constructive action in the times of global change.

While renewable energy targets might be binding for the EU, some countries, such as Russia appear to sidetrack this pernicious issue and opt for non-binding pledges. Inconsistency breeds complacency, and those with a more lenient approach serve as an excuse for apathy and torpor. With G20 consuming 80% of global energy, it is crucial to stand together and step outside the comfort zone of voluntary action into the territory of collective legally binding targets.