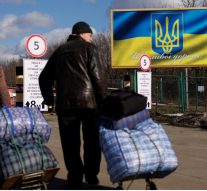 Following the Russian invasion, more than 1,5 million people fled Ukraine to Poland and other surrounding countries, according to the UN refugee agency (UNHCR). Kilometers of columns have been erected in certain areas, while authorities in Poland, Slovakia, Hungary, Romania, and Moldova are receiving Ukrainians and offer them with shelter, food, and legal assistance. According to UN High Commissioner for Refugees Filippo Grandi, most refugees stop in Poland or Moldova. On the Polish-Ukrainian border, specific receiving points for Ukrainian refugees escaping Russian military intervention in Ukraine have begun to be established. Pawel Szefernaker, Poland’s Deputy Interior Minister, built refugee reception centers in the districts of Lubelskie and Podkarpackie.

In the first phase, eight reception points were formed assisting with food, medical assistance and information. The Polish Office for Foreigners has also announced that it will set up a helpline and a website for Ukrainian refugees. Polish Prime Minister Mateusz Morawiecki, who had previously called for the strengthening of the eastern wing of NATO (Europe), said Ukraine was fighting not only for its independence but also “in the name of the whole of Europe”.

“Today we are in the phase of negotiations to take the most comprehensive sanctions against the Russian Federation, because only sanctions can stop Russian aggression. Dear Ukrainian neighbors, we will not leave you in trouble, we are with you. We will continue to provide humanitarian aid and accept refugees,” Morawiecki said. Meanwhile, the first Ukrainian refugees fleeing the Russian attack have crossed the Polish border. “We are fleeing Putin. We were in Lviv for a few days. Our friends said that the Russian invasion had begun. We immediately packed our suitcases and set off for Poland. We managed to cross the border relatively quickly. We still don’t know where we are going, maybe Krakow or Vienna, mostly as far away from the war as possible, “Ukrainian Alex, who crossed the border with his wife and two children in the Polish city of Hrebenne, told local media.

According to the latest government figures gathered by UNHCR, the UN Refugee Agency, almost 1,3 million refugees have fled Ukraine to neighboring countries in the last six days. At this rate, Europe’s worst refugee crisis this century appears to be on the way, and UNHCR is collecting resources to respond as fast and efficiently as possible. To date, all bordering countries have been required to maintain their borders open for Ukrainian migrants. Most of the refugees have sought refuge in Poland, Hungary, Moldova, Romania, and Slovakia, while others have relocated to other European countries. A significant number of people have relocated to the Russian Federation. The registration, reception, accommodation, and protection of these refugees will be handled by national authorities.

A lot of unity and support has been seen. UNHCR asks states to continue to allow access to territory for all persons escaping the violence, including Ukrainians and third-country nationals living in Ukraine. They emphasize that no one or group should be discriminated against. UNHCR has had a long presence in the region, which includes Poland, Hungary, Moldova, Slovakia, and Romania, and is coordinating the refugee response with other UN agencies and non-governmental organizations in support of national authorities.