On the 27th of May the European Commission adopted some proposals that were included in the European Agenda on Migration, the so called “first implementation package”. The Commission is indeed keen to show that it is trying to provide fast and concrete measures to address the current situation, because these first decision come only two weeks after the publication of the Agenda.

The first concerns resettlement. The Commission has adopted a Recommendation asking Member States to resettle 20.000 people from outside the EU over 2 years, based on a distribution key. Member States who participate in the scheme will be entitled to financial support, with the EU making €50 million available in 2015-16. The distribution key is grounded on objective, quantifiable and verifiable criteria, namely 1) the size of the population (40%); 2) the total GDP (40%): large economies are generally considered more able to shoulder greater migration pressures. Two corrective factors were applied inversely, the number of asylum applications received and resettlement places already offered in the past 5 years (10%) and the unemployment rate (10%). The data used for the distribution key have been provided by the same Member States to Eurostat.

The second action regards an emergency relocation of 40.000 people in clear need of international protection from Italy and Greece based on Article 78(3) of the Treaty on the Functioning of the European Union (TFEU). Relocation will concern respectively 24.000 people from Italy and 16.000 from Greece; the amount is based on their respective shares of the total number of irregular border crossings of persons in clear need of international protection over the last year. This scheme will apply to Syrian and Eritrean nationals in need of international protection that arrived in either Italy or Greece after 15 April 2015 or that will arrive after the mechanism is launched. Relocation will also be based on the same distribution key and it is supposed to happen over the next 2 years. Commission adds that Member States will receive €6.000 for each person relocated on their territory. 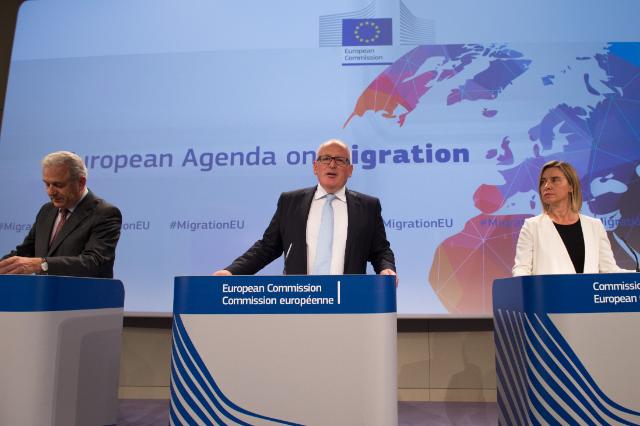 Joint press conference by Frans Timmermans and Federica Mogherini, Vice-Presidents of the European Commission, and Dimitris Avramopoulos, Commissioner for Migration, Home Affairs and Citizenship, on the European Agenda on Migration at the EU Headquarters in Brussels, 13 May 2015. Photo credits: ec.europa.eu

Another measure is the launch of an EU Action Plan against migrant smuggling, valid for 2015-2020. Actions include setting up a list of suspicious vessels; dedicated platforms to enhancing cooperation and exchange of information with financial institutions; and cooperating with internet service providers and social media to ensure Internet content used by smugglers to advertise their activities is swiftly detected and removed. The plan will focuse on 4 areas: Enhanced police and judicial response; Improved gathering and sharing of information; Enhanced prevention of smuggling and assistance to vulnerable migrants; Stronger cooperation with third countries. Among the actions, one of the most interesting is the proposal to establish single points of contact on migrant smuggling in each Member State.

Guidelines on EURODAC and Fingerprinting were also adopted, setting out a best practices approach for fingerprinting newly arrived applicants for international protection. It is interesting to note that “Hotspot” teams from EASO, Frontex and Europol will be established to work on the ground to swiftly identify, register and fingerprint incoming migrants and assess those who are in need of protection.

There will be also a Blue Card Directive public consultation aiming at collecting inputs to improve the existing EU Blue Card scheme. The consultation is available at this link.

Reaction from the Parliament could be find here: