Home / Migration / The Commission presents the European Agenda on Migration

Among the immediate actions, indeed it is relevant to mention that capacities and assets for the Frontex joint operations will be tripled and that the elements Operation Triton will be modify by the end of May to better respond to the situation in the Mediterranean Sea. However, three other initiatives result particularly interesting.

First of all, the Commission announces two tools to improve solidarity among Member State in managing migration flows (solidarity is supposed to be one of the pillars of the Common European Asylum System). The first tool is the launch of a temporary distribution mechanism for persons in clear need of international protection within the EU, to be decided already by the end of May. Second, a mandatory and automatically-triggered relocation EU system for relocation in emergency situations of mass influxes, by the end of 2015. Until today, relocation has been activated in very few occasions on voluntary basis, notwithstanding funding made available by the Commission.

Second, in view of reinforcing legal ways to arrive in the European Union, the Commission will dedicate 50 billion extra funding to ensure the realization of a EU-wide resettlement scheme to offer 20 000 places to displaced persons in clear need of international protection, to be followed up with a proposal for a binding and mandatory legislative approach beyond 2016. It is important to remind here that Germany offered alone 20.000 resettlement places for 2014 in the framework of the global resettlement efforts promoted by the UNHCR.

Third, the Commission declares the intention to launch an operation in the Mediterranean to dismantle traffickers’ networks and fight smuggling of people, within the scope of Common Security and Defence Policy, therefore drawing not only on civilian, but also military assets. Federica Mogherini already announced at the Security Council of the UN that the EU is working on a naval operation aiming at disrupting “the business model of human trafficking networks across the Mediterranean”. The content of this operation is still not clear, but will be discussed at the next EU Foreign Affairs Council.

While indeed the Commission is presenting concrete steps and funding to address the current situation, realization of these points is not in the hands of Member States, who have been until now the main obstacle to put in place a truly Common European Asylum System. It would be therefore key to follow discussions during the next European Council, in order to understand if the proposals of the Commission will be implemented and how. 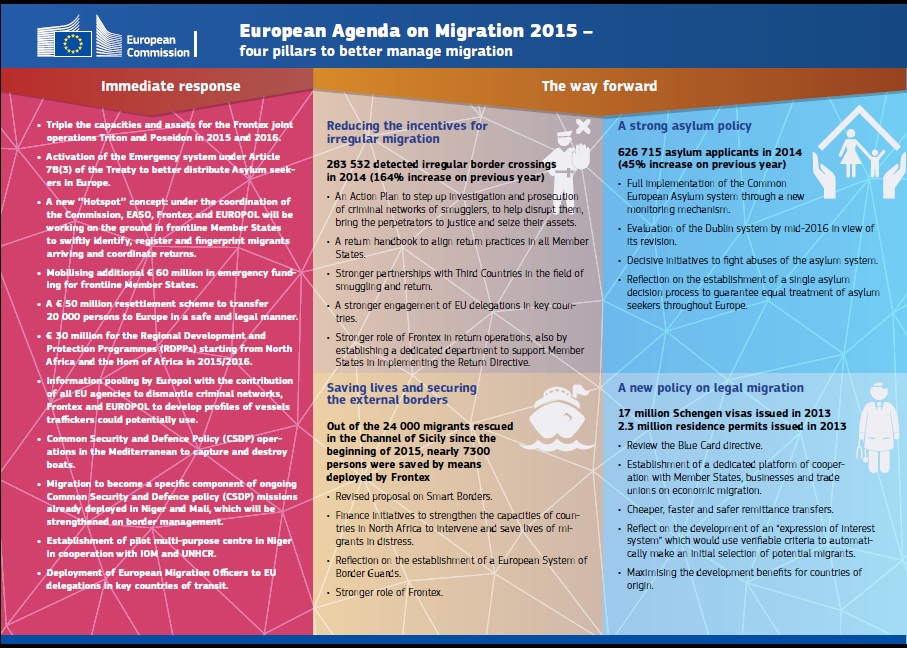 To read the reactions to the European Agenda on Migration: