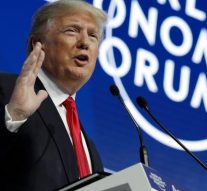 Another World Economic Forum in Davos, Switzerland is now finished. The most significant world leaders gathered into a several days event which attracted global public and media attention. Most notable speech was made by the US President, Trump.

The American president was by far the hottest ticket at the World Economic Forum in Davos, a mecca for central bankers, government officials and chief executives. Attendees flocked to see the speech, which began with a musical performance and warm greeting from organizer Klaus Schwab. Trump spoke to a packed conference hall on Friday, and more attendees watched on screens in three overflow rooms. And the reviews? The consensus was that Trump had tailored his “America First” message to the Davos crowd, and toned down his populist rhetoric. “Certainly he was very successful in presenting his successes,” said Stephan Gemkow, chairman of the investment firm Haniel. “The speech had a very strong domestic focus,” he added. “I would have wished to hear more about international, multilateral aspects.”

Staunch Trump critics were not swayed. “It was very much what I expected,” said Nobel laureate Joseph Stiglitz. “They kept it short, because he has a hard time keeping on script.” Other attendees suggested that Trump, who focused largely on issues related to trade and the economy, could have done more to address the theme of this year’s conference, which is “creating a shared future in a fractured world.” “It was just all about money. It’s almost making me cry,” said Pippa Small, a designer from the U.K. “There were so many issues omitted, climate change being obviously a huge one.”

Fears that Trump would use his speech to announce new protectionist measures proved unfounded and he stuck to a script in which he insisted the US was committed to free and open trade, provided the rules were fair. He also sought international cooperation to “ denuke the Korean peninsula”.

The Guardian announced that: “While wooing big business, Trump made it clear that the address was also intended for a domestic US audience”. “Only by hearing and responding to the voices of the forgotten can we create a bright future that is truly shared by all,” he said. The rich and powerful people at the Swiss mountain resort had the power to transform lives and shape their countries’ destinies, Trump added. “With this power comes an obligation, however, a duty of loyalty to the people, workers, customers, who made you who you are,” he said. The US president said the stock market had reached record highs on more than 80 separate occasions over the past year and tax cuts that offer most to corporations and the well-off were trickling down to workers. “We lowered our corporate tax rate from 35% all the way down to 21%. As a result, millions of workers have received tax cut bonuses from their employers in amounts as large as $3,000,” he said. Trump said he had cut 22 “burdensome” regulations for every new rule, saying this was freeing businesses and workers to flourish as never before. “Regulation is stealth taxation,” he said, attacking unelected bureaucrats for imposing anti-business and anti-worker rules. “In America, those days are over.”

As the Globe and Mail concludes: “When the same words are uttered by Mr. Trump, an object of suspicion for much of the U.S. security apparatus, they become just another part of the narrative spectacle by which he channels the loyalties and antipathies of his supporters. For Mr. Trump, going to Davos amounts to no more – or less – than taking the show on the road.”