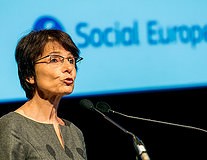 On the 4th of February the European Commission approved the proposal to advance 1 billion euro in payments from the Youth Employment Initiative (COM(2015) 46 final). The initiative was presented by Commissioner Thyssen at the plenary session of the 10th of February and encountered a wide support by many MEPs.

The proposal stems on the analysis that one year after the adoption of the Youth Employment Initiative (YEI), the results haven’t met the expectations yet and they haven’t led to a quick mobilization of resources from the YEI. One of the reasons that has been identified by many Member States is the lack of sufficient pre-financing to launch the necessary measures. For instance, those countries with higher level of youth unemployment are facing particular difficulties to implement the measures as they are also the ones which have more budgetary constraints and lack of funding.

Thus, the Commission has proposed to raise the rate of pre-financing for operational programmes in 2015 from the actual 1% (1.5% in Member States with financial assistance) to 30% of the total budget, that is almost 1 billion euro. This modification would not entail any change to the national allocations provided by the Multiannual Financial Framework 2014-2020 but it merely proposes to advance in time these funding, facilitating Member States to implement the YEI and to launch measures that directly benefit young people.

Although the proposal was positively welcomed, some MEPs invited the Commission to take into closer consideration the problems related to the implementation of the YEI in the different Member States, which are often due to inefficient employment services and burdensome administrative procedures (especially in Southern European countries). Furthermore, some MEPs underlined that the budget allocation for youth employment is still not enough and a debate on this issue should be opened as a basis to the mid-term review of the Multiannual Financial Framework, scheduled for the end of 2016.