Home / Energy / December 2015 in Paris: a global agreement for a better quality of life? 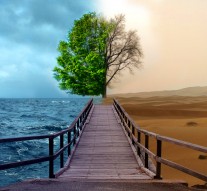 No Comments on December 2015 in Paris: a global agreement for a better quality of life? 44

In the last 650.000 years, the Earth has experienced seven cycles of glacial advance and retreat. Current climate era dates back 7.000 years ago, when the last ice age ended. The cycles were mainly caused by very small variation in Earth’s orbit that change the amount of solar energy out planet receives.
However, the current warming trend most scientists agree upon is not related to orbit variation but seems to be human-induced.

Most studies on global warming are conducted analysing ice cores, so to investigate atmospheric concentration of dust, gas and human pollutants brought by snowfall and captured in the glacier. Apparently, greenhouse gas is pervasive in Greenland, Antarctica and tropical mountains glaciers, demonstrating the presence of a heat-trapping cap around our planet. Human pollution is the primary scapegoat to blame.

The evidence of climate change is undeniable:

– sea level rose about 17 cm in the last century;
– in the past 12 years, we have had 10 of the warmest years since 1880;
– ocean temperature rose by 0,302°C since 1969 and its surface is increasingly acid (so called ocean acidification);
– extreme events (intense rainfalls, exceptional heat or cold, etc.).

The European Union agrees with global warming concerns and is investing on environmentally friendly solutions and global warming campaigns both in Europe and worldwide.
For EU, climate change policy should not stand alone, but instead must support economic growth and a broader sustainable development agenda. Climate policy should be mainstreamed across all policy areas and form a key component in the design of energy, transport, industry, agriculture, and forestry.

Moreover, it is a worldwide issue: “environmental effectiveness will require contributions from all major economies and all sectors in a comparable, equitable, transparent and accountable manner that minimises the risk of carbon leakage. Securing contribution from all major economies and all sectors is therefore essential. Without such agreement, individual states and regions may continue to hold back their climate ambition in relation to what their competitors are prepared to do. To help avoid this, the 2015 Agreement could both encourage and incentivize countries to adopt ambitious commitments sooner rather than later, and help level the playing field between current leaders and laggards”.

The 2015 Agreement is the global one expected to be signed next December during the Paris meeting. This “global team attitude” is also shared by scientists, such as Prof. Carlo Rubbia, Nobel Prize in Physics, Scientific Director of IASS Potsdam and Former Director of CERN. And we hope that policy-makers in Paris will all agree upon a coherent energy policy relaying on innovative scientific and technological developments, in order to restore sustainable development and economic growth with the threat of facing global warming.

Indeed, our society will depend crucially on uninterrupted and differentiated energy supply. Major steps have to be taken in order to avoid potential geo-political and price vulnerability. The human capital of the most educated society is a decisive factor for the establishment of norms of social conduct. We must recognize the duty to society in terms of long term actions rather than of immediate interests. Only through such a concentrated and coordinated effort, leadership can be targeted and the objectives of creating high quality employment opportunities and a better quality of life be met.